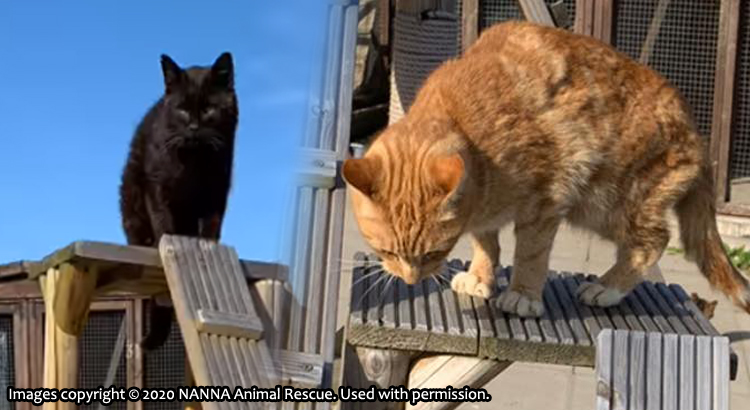 Back in July 2017, we had some custom climbing frames/towers built for Mika after his previous ones became too weather-worn and unstable, making them potentially dangerous. After Mika’s sudden and unexpected passing in November 2018, and due to family circumstances, we decided we wouldn’t have any more pets, so we asked a few local people/places if they could make use of the frames. Despite some initial interest, there were no takers.

Recently, I got in touch with David at Cat Climbing Towers, the guy who made the frames for us, to ask if he knew anyone who might want them, telling him that they could have them for free as long as they could collect them. He put a post on his Facebook page, and we had lots of interest from individuals, foster organisations, veterinary nurses, and more, with many offering to pay something for the frames or donate to a charity in our name. Any of them would have been a worthy recipient.

But one of the interested parties stood out to us… NANNA Animal Rescue. This was the organisation from which we adopted Mika back in October 2009 when he was around eight weeks old, and we felt this would be the most appropriate new home for the frames, ‘completing the circle’ as it were. We offered them the frames, and they were able to organise a van to collect.

They recently posted some photos to their Facebook page of their rescue/feral cats making good use of the frames, and it makes us happy to know that so many will continue to benefit from them for a good number of years to come. We’re sure Mika would approve.