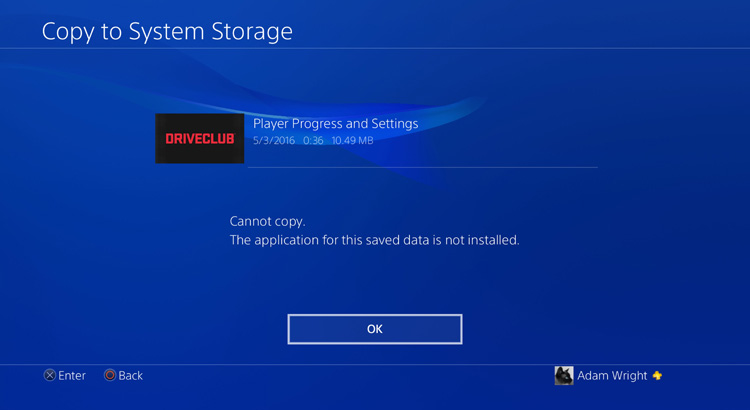 There are several things people want to see in future PS4 firmware updates, some fairly major, others trivial. Some of those – such as external hard drive support – are coming in firmware 4.5. But there’s one thing which needs addressing which I’ve rarely if ever seen mentioned.

This particular ‘issue’ will be pretty trivial for most PS4 owners most of the time. But if you ever buy another PS4 or need to change your hard drive, chances are it will become quite major for you.

I’ve just bought a PS4 Pro and am in the process of installing my games on the system. Prior to wiping my old PS4, I copied the save data for all of my games to both PSN cloud storage and a USB drive, just to be sure. This was easy to do: make a bulk selection, and every single save was uploaded or copied at once. However, copying them back is proving to be a royal pain in the backside.

The reason for this, if you didn’t already know, is that you can’t copy a save back onto a PS4 unless the associated game is installed – just have a look at the header image for this post. I’m sure Sony feel there’s a reason for this, but I just can’t see what purpose is served by blocking save restoration in this fashion.

Where I had hoped to save a bit of time right now by simply copying all of my saves onto the new system, and then installing the games as and when I played them, I need to install every game just to get the save back on the console. Compared to some, I don’t even have that many games; for those who have a collection of hundreds, it must be infuriating. In a user interface which is otherwise very quick and simple to use, the inconvenience this presents sticks out like a sore thumb.

Anyway, that’s the end of this little grumble. I hope Sony see fit to rectify it in the future.