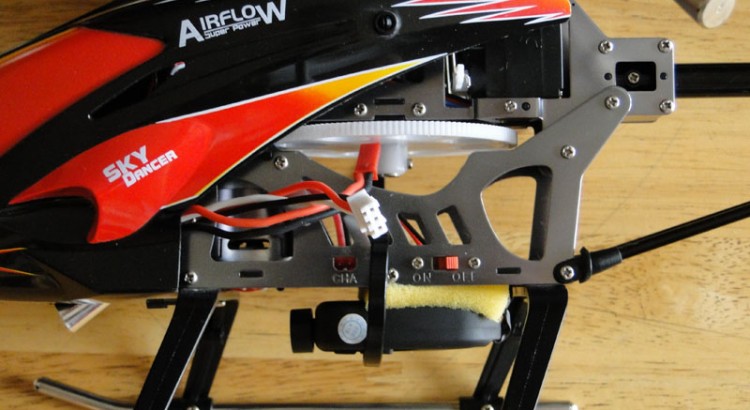 Having seen several videos on YouTube from people who have fitted cameras to their WLtoys V913 helicopters, I decided it was something I wanted to do myself.

I have the Lucky Boy 9961 which has a built-in camera, but that only records at 640×480, and being a coaxial helicopter means it can struggle outdoors on anything other than perfectly calm day. In fact, our lawn slopes a little, and on a hot day the 9961 can even struggle to fly up the garden as the warm air currents roll down. Being a more powerful helicopter, the V913 doesn’t suffer this problem and generally handles much better in a wider range of conditions.

I looked around to see what cameras people were using, and settled on an 808 #16 V2 Lens D camera, which I purchased from eBay seller ahongliang99. It’s cheap, lightweight, features a 120-degree field of view, records in high definition (1280×720), has a number of useful features, and provides very good picture quality. The issue then was how to mount it on the helicopter. Again I checked out what other people had done, but practically every solution involved modifying the helicopter (drilling holes etc.), or sticking something to the helicopter on a permanent basis – neither of which I wanted to do.

Studying the helicopter body and camera casing, I realised it should be possible to attach the camera in a way which would be quick to mount and remove, without the need to make any permanent changes. Using a wire twist-tie, a releasable zip tie, and a dishwashing sponge, I managed to do just that.

The scouring surface is easily removed

The camera is held securely under the helicopter, the sandwiched sponge absorbing any vibration from the motor

The twist tie secures the camera by looping around the frame and rear boom support struts, also preventing any fore/aft movement

The twist-tie secures the camera to the body via the keyring hole in the case, a cut-down portion of the dishwashing sponge is sandwiched between camera and heli body to absorb vibration, and the zip tie holds the front end of the camera steady while still allowing access to the power and shutter buttons. Simple and secure, while remaining completely removable, without leaving anything stuck to the aircraft body.

In many of the videos I’ve seen where the camera is attached directly to the body, there’s often a ‘jelly’ effect caused by the vibration of the motors, and the whole image seems to wobble. Having the sponge between the two hasn’t completely eliminated it, but it does seem to be less obvious, at least in this initial test. The most noticeable area is the left skid, but the rest of the image is pretty stable. The sponge I used is fairly solid, though – a softer one may further reduce the effect. I may also see if I can move the camera a little further forward, but that could upset the balance.