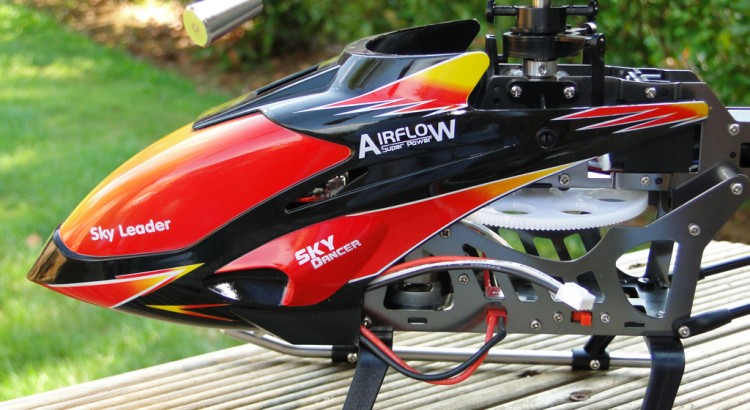 I finally got my hands on the WLtoys V913! I initially ordered this heli from Amazon at the end of July, but the two I received both arrived with broken transmitters and were returned for a refund.

This model has otherwise proven tough to track down in the UK. I searched the websites of numerous model/hobby stores and not one had any mention of it. I could have imported from a few online suppliers in the US and the far east, but then of course you have customs import duty and (possibly) a fairly hefty return postage cost if there’s anything wrong with it.

So I’ve been checking back with Amazon every so often for new stock, with no luck. Finally, a couple of weeks ago, I found someone selling through Amazon – Big Boyz; they only had one left in stock, so I thought I’d have one last try before giving up on it. I’m sure glad I did!

Opening the outer shipping box, my hopes were immediately raised. It seems the issues I encountered with broken transmitters may have been fairly common, as everything about the packaging has been completely redesigned, giving more clearance between the sticks and the side of the box. The box itself is also made from much stiffer cardboard, with no plastic viewing window. Essentially, it’s seems to have been designed with a priority on protection during shipping, rather than a pretty in-store display.

But enough about packaging – what about the helicopter? Well, it’s superb! It’s almost identical to the V911 but much, much bigger – it’s by far the biggest in my current fleet, measuring approximately 21¼ inches long, 4 inches wide and 8 inches tall. As you can hopefully tell from the photos and video, it looks fantastic, and if anything is even better ‘in person’.

The transmitter supplied allows switching between all four flight modes, and also the same ‘high’ and ‘low’ servo rate settings as the V911, allowing you to choose between two levels of responsiveness. There are also some other functional buttons which as yet serve no purpose, such as taking photos. To save me going into too much detail here, YouTuber mnemennth has already posted an excellent overview of the transmitter.

Out of the box, flight is extremely stable, with minimal trimming required. The size and weight mean that it’s not as fast as the V911, but it’s still quite nippy. The positive side of that extra weight is that it flies fairly well in windier conditions. It’s not going to make much progress against strong, gusting winds, but it will deal quite happily with stronger breezes that would carry the V911 away from you.

The V913 is also fairly tough. The canopy is the same springy plastic as the V911, and the plastic skid supports are stiff but flexible. I have crashed it once, into the small wooden fence you can see along the flower bed on the left of the video; that was from a height of 4 or 5 feet, and there’s not a mark on it. It’s great fun to fly, though, and the only real problem is that it’s a bit big to fly freely around our garden. I need to take this to one of the nearby fields to really let it loose, so I’ll have to hope for some relatively calm, dry days as we head into winter.