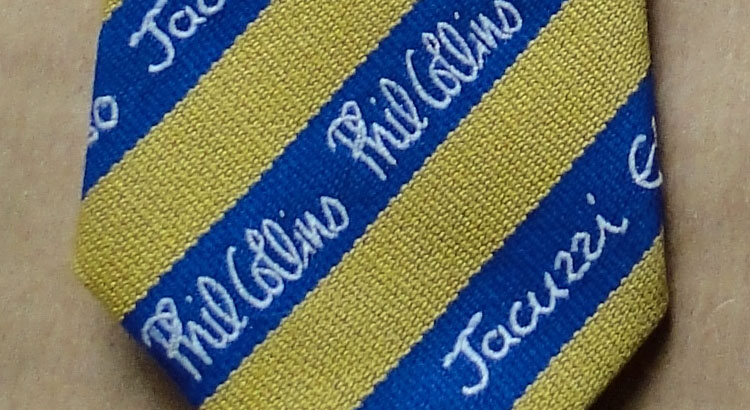 I’ve been meaning to post something about this for a while, but kept on forgetting about it!

Since my late teens, I’ve been a big fan of Phil Collins and Genesis. Yeah, I know it’s not ‘cool’ to like Phil Collins, but I was never interested in being cool anyway, so I don’t care!

Anyway, first a little background. From my early to late teens, I was in and out of Great Ormond Street Hospital for a series of operations on my lower back. The first operation at age 13 left me with a hole in my back, about the size of a large chicken’s egg and about two inches deep, at the top of which you could apparently see the base of my spine. Due to the nature of the operation, doctors felt it best to let the hole close naturally. It was a very slow process, and because I could barely sit, lots of time off school followed – years, literally.

During that time I had home tutoring, moved out of London with my parents, lost touch with most of my friends, started a new school (being put back a year due to the time I’d missed), and was constantly back and forth to Great Ormond Street for a series of tests, checks, minor procedures and further operations to try and get the hole to close naturally. These included a very painful skin graft (which failed) and, finally, a mass of stitches which has left me with some fairly ugly scarring.

Coming up for my 21st birthday, with all that in the past and finally having been given the all-clear by GOSH, my parents wanted to get me something extra special. I had no idea beforehand, but my mum, more in hope than expectation, wrote to Phil Collins via his Personal Assistant. She explained the situation, said that I was a big fan, and asked if there was any way she could get something ‘personal’ of Phil’s as a gift for my 21st.

And would you believe it… she received a tie which Phil wore on his first solo tour in 1982!

Obviously, I was stunned when I received it on my birthday. I think (it’s a while ago now) I even wrote back to his PA to say thank you. While I’m perhaps not quite as big a fan now as I was back then, I still love his music, and the tie remains one of my most prized possessions. I was once offered £200 for it, and flatly refused.

Phil can be seen wearing the tie (well, one of them… I’m sure he had a few) on the cover of the ‘Live at Perkins Palace’ VHS/DVD. He’s also wearing it throughout the performance, much of which has been uploaded to YouTube by various people. Who knows… it could just be the one I have!

Tie worn by Phil Collins on his first solo tour.