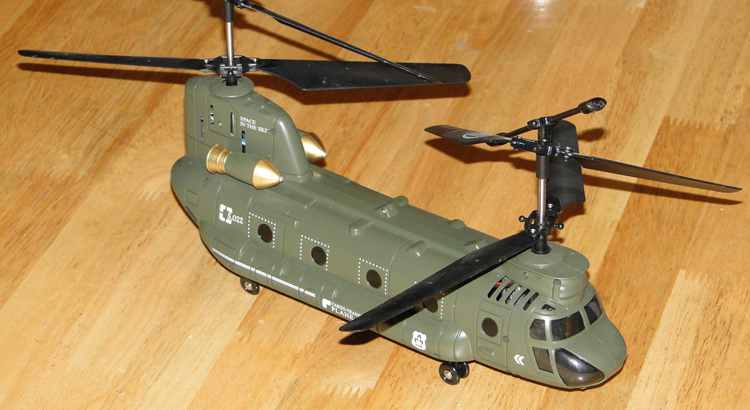 A quick catch-up, in case you haven’t read my previous posts on the subject: I bought a small remote controlled Apache Gunship a few weeks back, and found it to be fairly addictive.

So much so that I’ve been looking for other models, and it’s fast becoming a new hobby, rather than a quick bit of fun.

Now, thanks to my parents, I know I have an E-flite Blade CX3 coming this Christmas. But these things are so addictive that I wanted – no, I needed – another one to fly while the Apache was charging. I chose to look for something not too expensive, but a bit more of a challenge.

After looking around various websites, and watching numerous videos on YouTube, I settled on the SYMA S022, otherwise known as the ‘Big Chinook’ to differentiate it from Syma’s smaller model of the same helicopter, the S026. It was under £40 from Amazon, and as you’ll see in the video, this thing is quite a bit larger than the Apache. It’s also radio controlled rather than infra-red, which means it can be used outdoors – as long as it’s a dry and perfectly calm day. Unfortunately, I haven’t had the chance to try it outside yet. The instructions say not to operate it in temperatures below 4.5°C (~40°F) and it’s been colder than that since I’ve had it, so I’ve been limited to flying it indoors. Anyway, have a look, and I’ll tell you more about it below…

Flying this thing inside has proven to be quite a challenge, and it has taken me far longer to get used to than the Apache. In fact, I’ve had it for about a week now, and I still don’t feel as if I’m in complete control of it. The larger rotor size, combined with the fact that it has four rotors instead of two, means that it shifts far more air when in flight. So far, it has blown pens, cigarette lighters and entire newspapers off of the dining room table, and almost emptied the entire contents of an ashtray over the floor!

In addition to the extra power, the model itself is extremely light. Consequently, in an enclosed space, it tends to get blown around by its own rotor wash, making it fairly difficult to control. The extra power also means more speed, which in turn adds to the control difficulty. With the Apache, you can push the control stick all the way forward, and it will take several seconds to travel from one end of the room to the other. With the Chinook, anything more than fine movements on the stick and it takes off (no pun intended) like a greyhound out of the traps. So as you can imagine, indoor flying requires small stick movements and large amounts of concentration. Although advertised on many sites as suitable for indoor or outdoor use, I wouldn’t really recommend it for indoor use unless you have a very large house and very little in the way of breakables!

I’m also finding it more difficult to trim than the Apache, as the trim is adjusted via buttons, whereas the Apache has a rotary dial – i.e. the Chinook trim controls are digital, while the Apache’s are analogue. This means that I’ve so far been unable to get the Chinook to fly perfectly straight, as it has a tendency to rotate slowly left or right. It’s nothing that can’t be rectified with some delicate control, but it’s proof, perhaps, that digital isn’t always best.

It’s also noisy! Not deafeningly so, but enough that you have to raise your voice significantly to be heard over the whine of the four electric motors and the beating of the rotor blades. Okay, it doesn’t sound like a real Chinook, and it doesn’t really come across in the video, but when you’re standing close to it, there’s a definite low rumble from the rotors.

Fortunately, despite the control issues and the light weight making it feel quite flimsy, it’s a tough model. I’ve had a few minor crashes, with no obvious damage. In fact, in one of the YouTube videos I saw, a guy flies his one into tree branches about fifteen feet up, and it falls to the ground on a concrete path… but there’s no obvious damage, and it still flies.

None of the above should be viewed as a complaint, though. I wanted something which was more of a challenge to fly, and that’s exactly what I’ve got. It’s great fun, and exactly the kind of thing I need if I ever plan to step up to flying the more advanced models. Anyway, I hope you enjoy the video. I’ll upload some of an outdoor flight as soon as the weather permits one!

Between typing all of the above and shooting/uploading the video, I had a small problem. While installing the battery in preparation for the flight I was going to record, I dropped the small battery cover screw inside the body of the helicopter! Try as I might, I couldn’t get it out again; in fact, I couldn’t even hear it rattling around.

Guessing that it had probably got stuck among the inner wiring, I decided to void any warranty and open it up. Several minutes and a lot of care later, I found the screw… stuck firmly to one of the rear motors via a surprisingly strong magnetic field! Having retrieved the screw, I decided to take a few photos of the innards while I had it open. As you can see, there really isn’t a lot to it, and fortunately, the thing still worked when I put it back together!