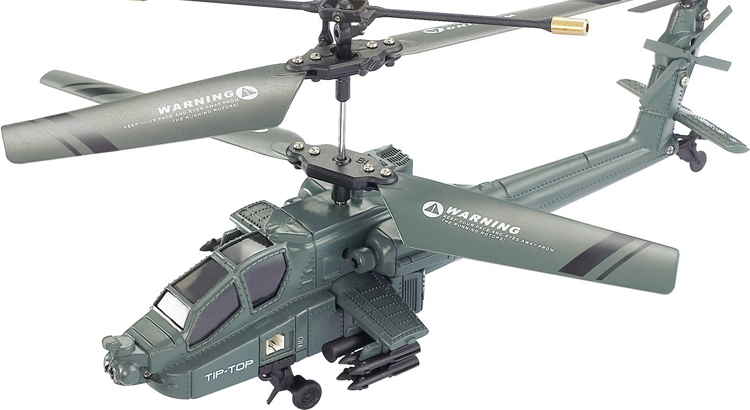 This last week has seen me fulfil one of my childhood dreams… to own a remote controlled helicopter! Well, kind of…

I don’t really know why, but helicopters have always amazed me – just something about the way they look and operate, and the many roles they take. From killing machines like the Apache, to life-savers in the form of air ambulances, and even luxury taxis for the rich. Whatever its task, a helicopter is always cool!

As a kid I always wanted a remote control model helicopter, but they were too expensive. In my teens, I watched Airwolf and Blue Thunder every week. As I grew up and started work, I considered buying one – but they were still expensive; the cost and time to build, combined with the likelihood of a crash destroying all that money and hard work, continued to put me off. Even now, in games like GTA or Just Cause 2, the choppers are always my preferred mode of transport.

Now, however, technology has advanced to the stage where we can all buy small, incredibly stable remote-controlled helicopters for under £20 – and I just couldn’t resist. So I ordered an Apache from Play.com, which arrived last week. You can see it in action in the video below.

Okay, it’s not exactly the three foot long petrol-driven mini Airwolf that I dreamed of as a  teenager, but it’s a helicopter, and it flies! And for its small size, it’s an impressively detailed model. Aside from the fact that real Apache’s don’t have dual, counter-rotating rotors, of course…

According to some reviews, these things can still take a day or so to get used to, but I was quite proficient after three or four charges and around thirty minutes actual flying time. I put that down to being a gamer, and being quite used to controlling things in a 3D environment with two joysticks – something which other reviews also suggest.

It suffered a few crashes during those early flights, but nothing broke, which is quite impressive since it hit doors, walls, chairs, tables, and on one occasion plummeted from around five feet onto a carpeted (but still quite hard) floor. Either I’ve been lucky, or it’s a lot more robust than it feels! Anyway, I no longer fly it into things, and while there’s still the occasional rough landing, they now tend to be from lower heights and at lower speeds.

As you can see in the video, these models are incredibly stable in flight. That stability comes from the fact that there are two sets of main rotors which spin in opposite directions, removing any need for a tail rotor. There’s also a weighted spinning bar above the rotors which creates a gyroscopic effect, keeping the whole thing stable.

Forward and backward motion is created by a tiny horizontal rotor on the tail of the aircraft, which pushes the back end up or down, angling the entire body slightly (and therefore the main rotors) to provide forward or reverse thrust. The only disadvantage of this system is that the helicopter cannot fly directly left or right like the real thing, or the more sophisticated and expensive radio controlled models. However, in my personal opinion, that’s a very small price to pay.

The description on the website says that the Apache model comes with an LED in the nose, which is true. But what I haven’t seen mentioned anywhere is that there’s also a series of four coloured LEDs in the underside of the tail, which flash in sequence. Okay, it’s not exactly realistic on an Apache gunship, but it does look good when you’re flying the model in low light!

You can turn the lights on and off with a rotary switch on the top-left corner of the remote. On the top-right corner is another rotary dial for setting the trim. In flight, the helicopter may tend to rotate slowly to the left or right; turning this control slightly in the opposite direction will eliminate that rotation, allowing for perfectly straight flight. If you imagine holding a PlayStation DualShock 3 controller, these dials are roughly where the L1 and R1 buttons would be, so they’re in easy fingertip reach, and don’t distract from flying at all.

There are a few things which anyone should consider before buying these models; some are obvious, some are not, so I’ll pass on some of my experiences so far.

Be very careful of eyes, pets and anything fragile while you’re learning how to fly. While the helicopters are light, they can move quickly, and while the blades are only plastic, they still spin very fast. If you fly it into a person, it might sting a little – but if hit in the face, there is the potential to blind someone.

Pets may be nervous of the sound; it makes a relatively loud, high-pitched whine, as you can hear in the video. In particular, if ours is anything to go by, cats may try to leap up and pluck it from the air! Also be careful of vases, picture frames etc. as there could be sufficient momentum to knock them over.

When learning to fly it, when it comes to the first take-off, there is a tendency to want to ease into it. You nudge the throttle lever slowly forward, trying to gently ease the helicopter off of the ground while not gaining too much height in case something goes wrong. Bad move! My model had a tendency to drift to the left as it lifted off (possibly due to some ground effect), which can be unnerving. I found the best solution was to give it some welly – whack the throttle stick forward to get it clear of the ground quickly, then ease off and let it settle into a hover before flying around.

Despite the small size, the rotors on these things create quite a downwash; even flying at a height of five or six feet, it will still easily blow a sheet of A4 paper across the floor. So once again, you’ll need to be careful of anything lying around that’s small or lightweight; for example, I have a small Airfix model of a Harrier which was almost blown off of a shelf.

Also, remember that these models are controlled by infra-red, not radio waves, which means the range is limited, and you must have a line-of-sight between the controller and helicopter at all times. Fly it around a corner, and it will drop like a stone.

Other than that, I would highly recommend one of these if you have ever had any interest in flying a remote controlled helicopter. For adults and children alike, it’s incredible fun to play with, and once you get used to it, I defy anyone not to smile like a kid at Christmas while they’re flying it. In fact, I find it so much fun that I’m looking at buying more, so that I can play with one while the others are charging. I have my eyes on the Chinook and – of course – Airwolf. The only thing is, do I buy them myself, or add them to my Christmas wish-list? Either way, by January, I’ll most likely have a fleet of helicopters to call my own.